While I know that drawing is not an easy task, I am always surprised to see how much prep work I needed to do.  Here is the step by step process of my Robocop commission. 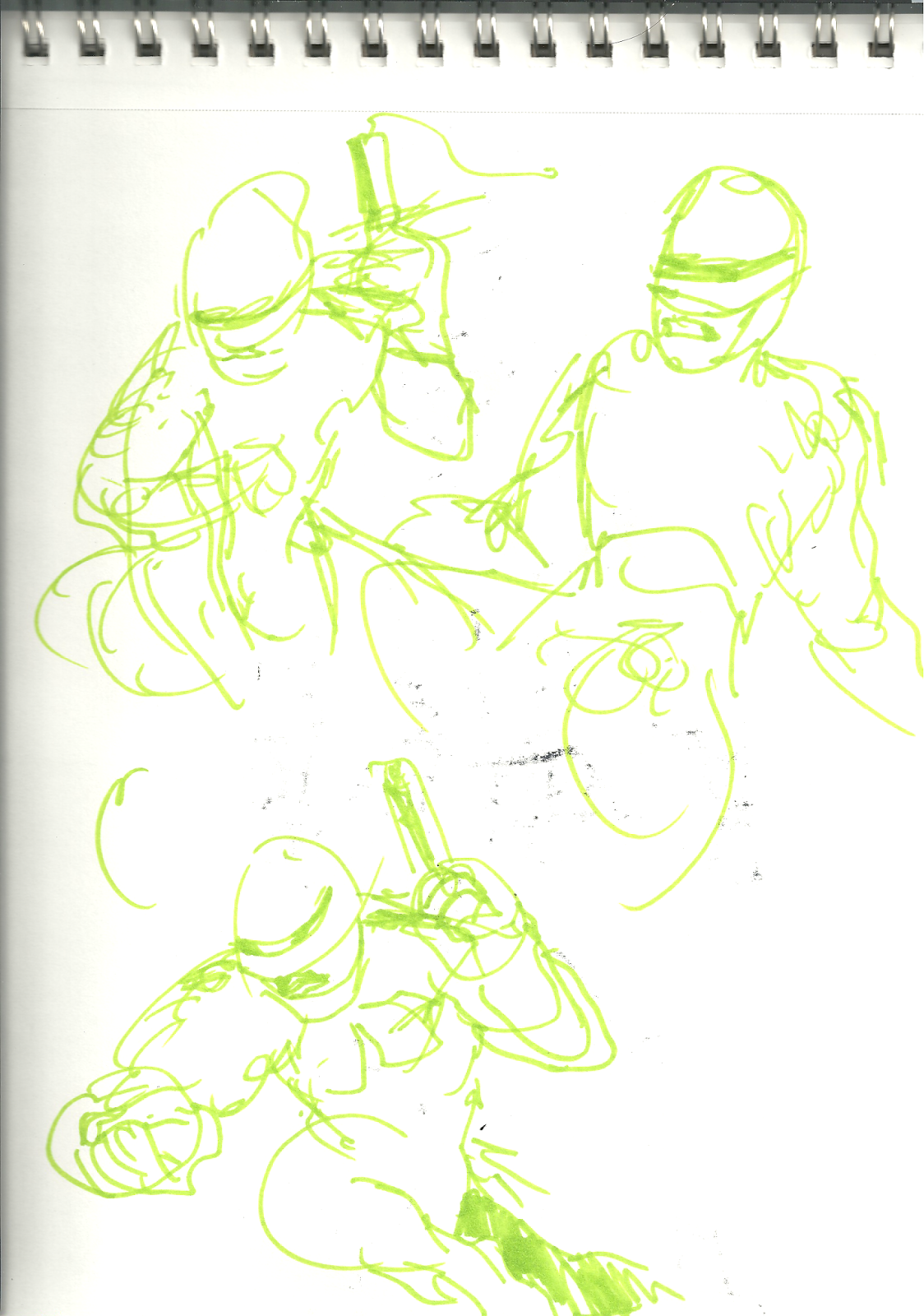 Step 1: At first, I had to draw up a couple of poses for how both Robocops should look.  It was easy to get the 80's Robocop pose down easily.  But I had some trouble trying to figure out how to make him look natural.  Also, I drew out what the two Robocops looked like before starting on the actual picture.  After all, you need to practice the details of their figures before you see them in an action pose. I have already posted those pictures up, which you can see here and here. 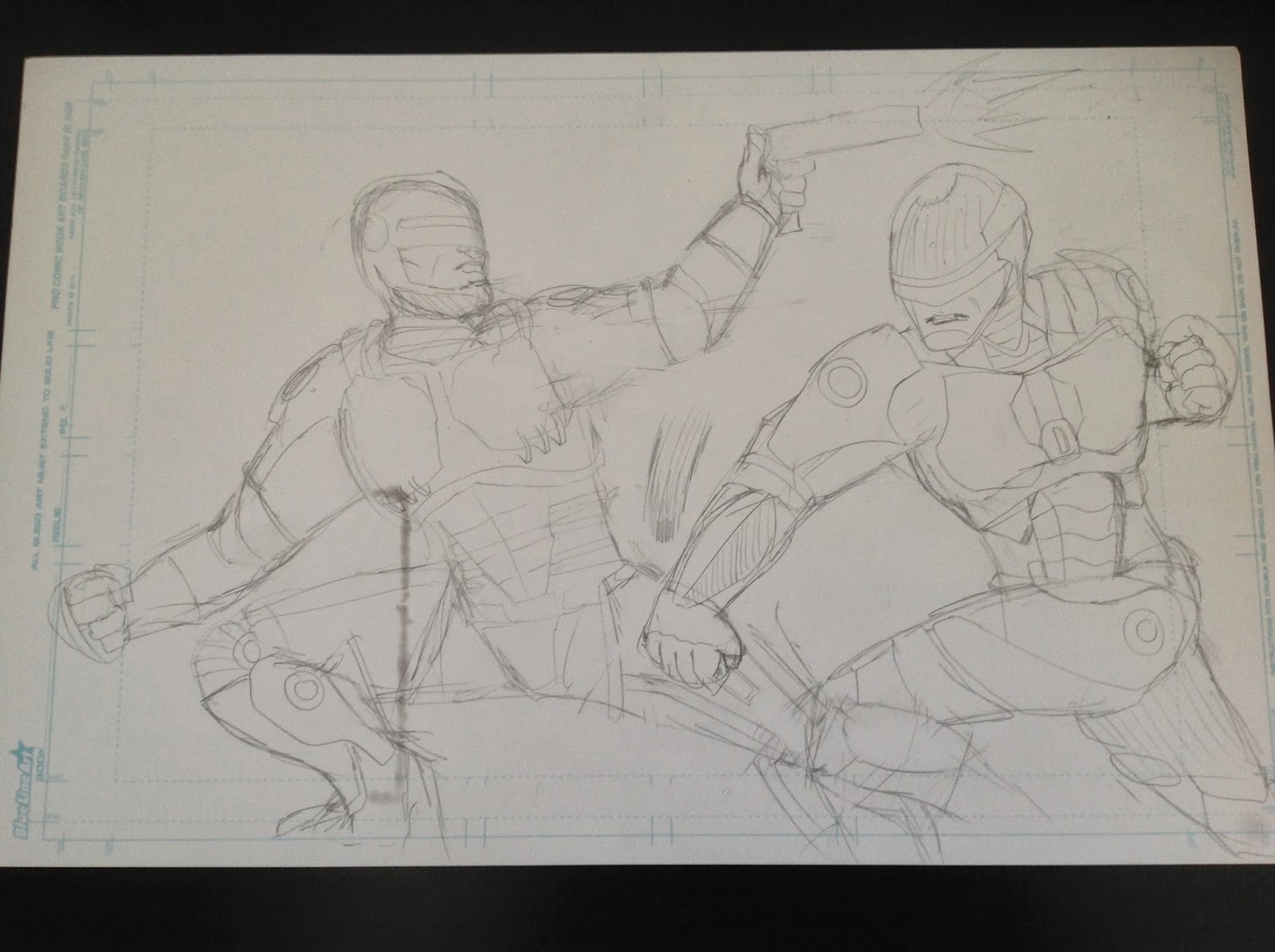 Step 2:  I got the initial sketch down!  This is the fun part where I draw the action, but without going into boring details.  If you look at 2014 Robocop's bent leg, I drew a lot of scribbles.  The thought here is that I wasn't sure initially where his leg was going to go, so I figured I half draw it and figure it out as I added more details.

Note that ugly oil stain on the left side.  I don't know how it got there.  It looks ugly and unsightly now, but it won't be so bad when I finish the picture. 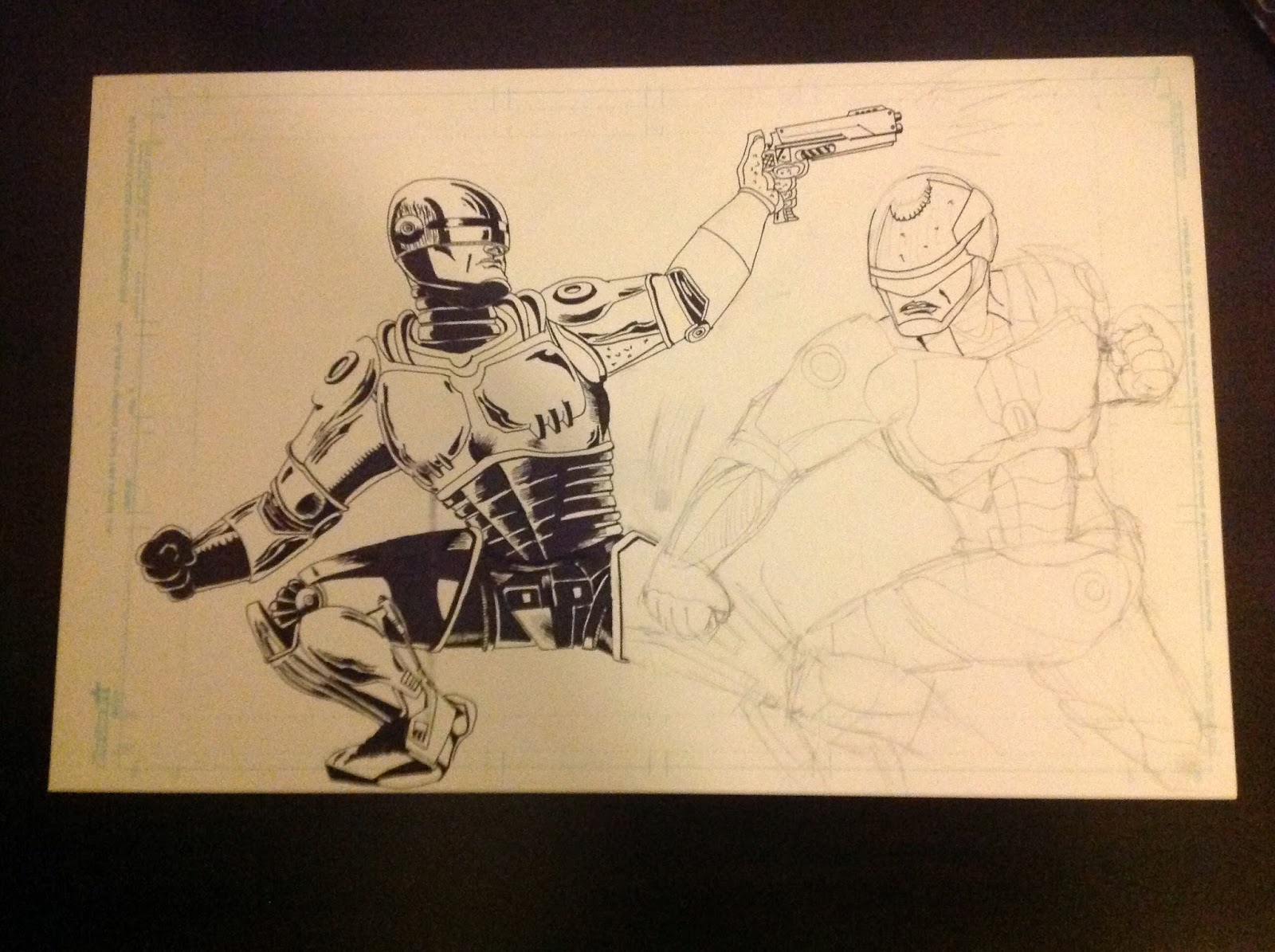 Step 3: I got most of the 80's Robocop done.  Notice that eighties Robocop's left arm is unfinished.  Upon closer look, you can see that instead of big lines of black on it, I drew in little tiny "x's" to indicate where I need to fill in with a black Sharpie later on. 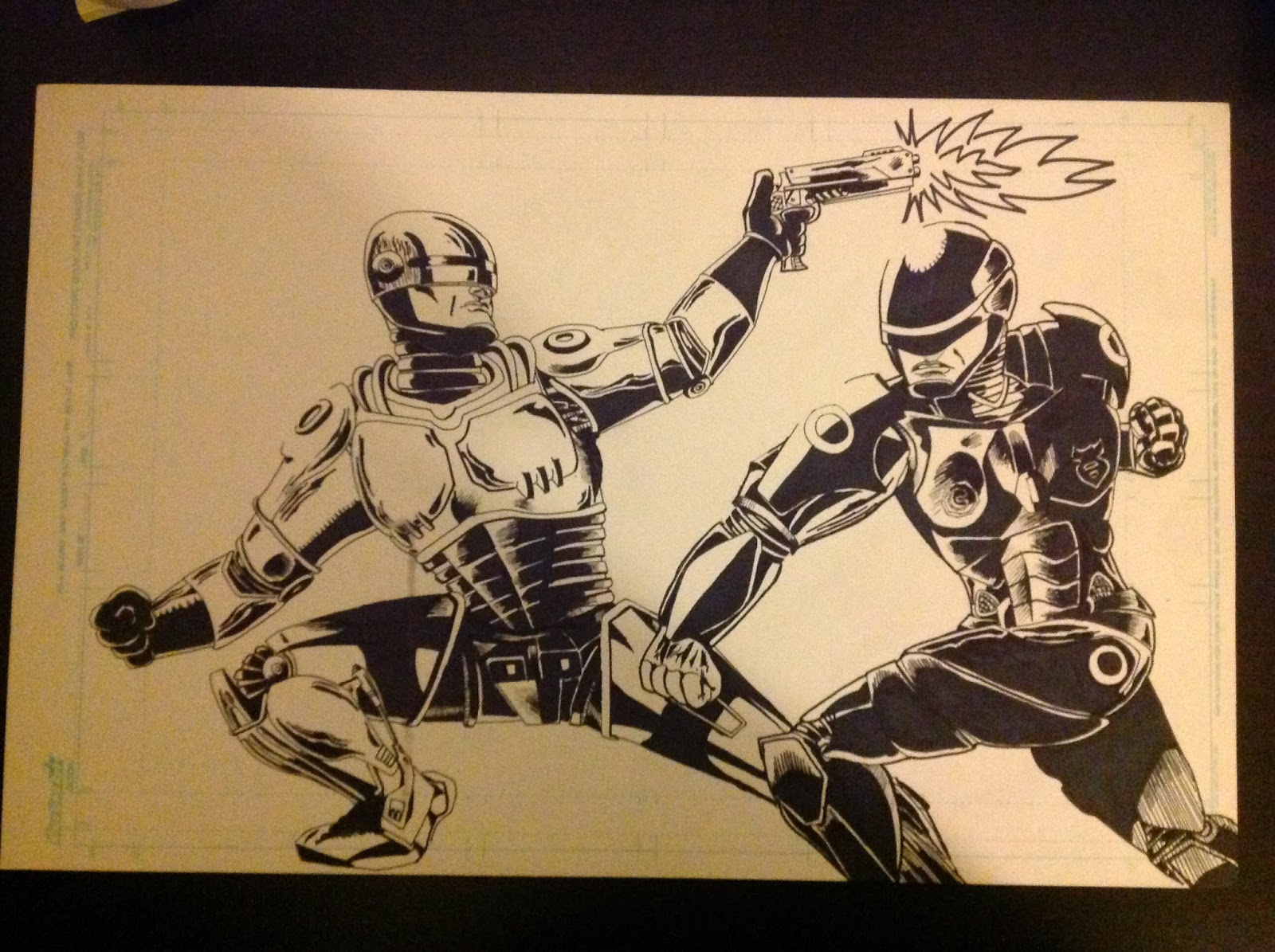 Step 4:  Okay!! Now both Robocops are done!  The blacks are all filled in and I got all of the inking lines drawn in.

Interestingly, as I drew 2014 Robocop, I realize I might've made his figure a little bigger than 80's Robocop.  To fix that problem, I decided to draw his leg overlapping 80's Robocop's leg to give the illusion of depth and that 2014 Robocop is a little closer to the viewer.

Also, the gross looking oil streak is not as visible anymore.  Now I need to do a background. 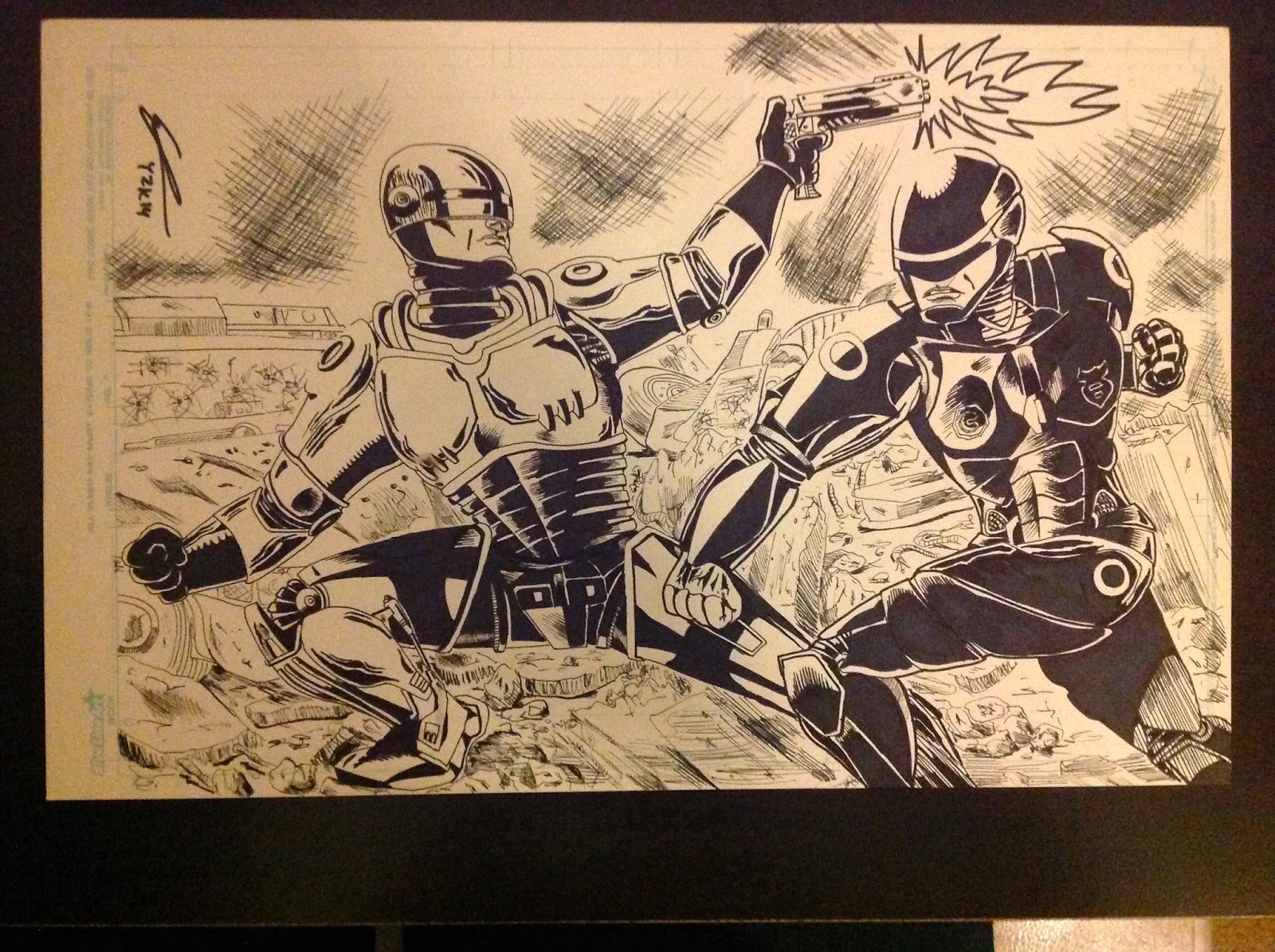 Step 5:  Here is the final product.  For the background, I wanted to make it a little story going on in the back.  So you see 80's Robocop's police car with bullet holes in it, implying that 2014's Robocop shot at it.   Conversely, I also have 2014 Robocop's motorcycle laying in the back.

I drew in tons of debris and broken columns.  The idea here is that they are fighting in a parking garage and it demolished it in their battle.