Can you believe that Force Awakens came out almost a year ago? And it gave us such great characters like Kylo Ren or Finn.

Anyways, moving on to the art piece. Now this piece...I love this piece! When I originally drew Kylo Ren in the snow, I was jazzed by how effective the White Out created the snow effects. While the original picture looks good in black and white, I think it is enhanced with the red of his lightsaber providing the only source of light. You can compare the difference between the black and white original and the colored version up top. 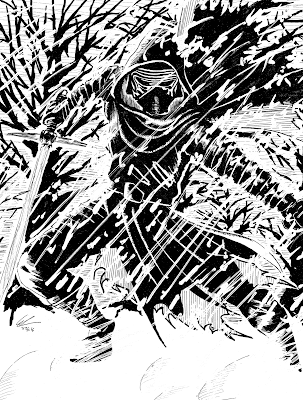 First of all, in the original, it is difficult to see where the lightsaber is in all of the snow. Also, Kylo Ren's figure is also more lost in the snow too. Fortunately, the red draws the eye to the lightsaber. It also highlights Kylo Ren's outline more and now it is easier to see where his body begins and where the background ends. It was a lot of fun coloring the drawing. What I did to get the different gradient effects of the red is set my digital paintbrush on a low opacity. When we go closer to the light source, the darker shade of red I used. When an object is far away from the light source, I would only lightly color it red. The most interesting part of coloring was that the middle of the lightsaber is actually completely white, implying that it is the brightest in the center of the saber "blade". One other tweak that I made is that I actually used digital White Out to create even more streaks in the picture. I specifically did it to cover the bottom of the snowy ground and Kylo Ren's feet because he looks more mysterious when you don't see his feet. This piece maybe my favorite piece that I have done in a long while.