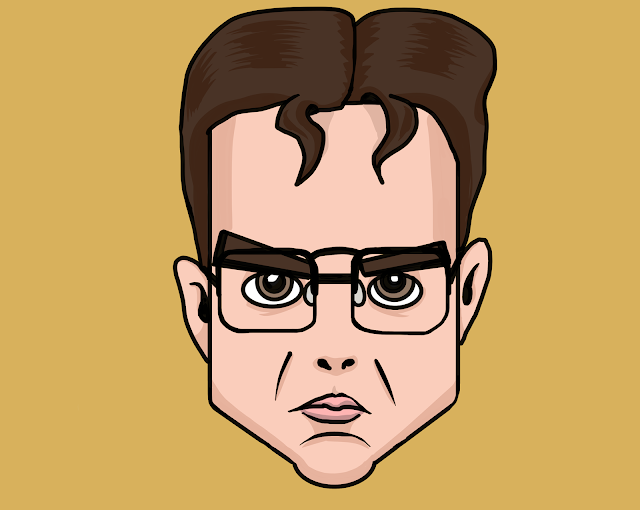 Gah. This face is a lot more disturbing up close than I thought. I know I have said in the past the level of difficulty to make caricatures based on real life people. However, if there is a person who's face looks like a real life cartoon character, it is Dwight Schrute from The Office. His face is so easy to break down and made to look like a cartoon: his boxy head, high forehead, round-beady eyes, and that hair!! His hair is so unusual. Do people even do their hair that way? Probably, but I have never personally seen it.

I had a lot of fun drawing Dwight because I actually just used the shape tool to create much of his head. His head is originally a rectangle that I shaved off the top and bottom parts. His chin is an oval that I connected with some lines to create a jawline. His eyes are just ovals overlaid with circles to create his pupils. His eyebrows were created using the line shape tool. And his glasses are just squares where I rounded of the edges to make them have traditional glasses shape.

The other thing that was fun about Dwight was applying the shadowing to him. My coloring process is that I use a flat color first and then put in the shadows afterwards. For shadows, I just use a slightly darker blend of the initial colors that I applied and then I strategically put them around the face. So like, giving his shadows under his hair strands at the top of his forehead makes the thing a little more realistic, but still cartoony. Incidentally, I prefer to just do my coloring shading in two-maybe three-tones at the most. Blending colors is a great effect, but it is time consuming and I prefer to make it simple.