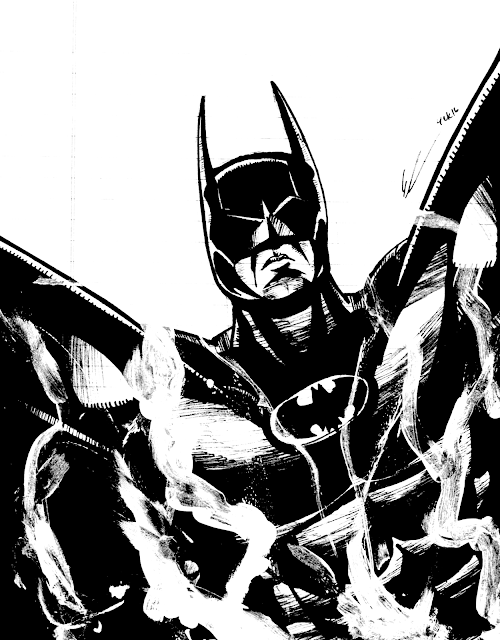 "Winged freak....terrorizes Gotham City? Wait until they get a load of me..."

There is no words to properly describe how much I loved the original Tim Burton 1989 Batman  movie. I grew up with that movie, own the terrible(ly awesome?) album by Prince, and have every line from the script memorized. Michael Keaton will be my Batman, even if Christian Bale and Ben Affleck are buffer than him.

This picture is really making me stretch my artistic muscles and trying take a leap of faith. I tend to not like to color a lot of blacks in a picture because I am always afraid of messing up the picture and I won't be able to go back to fix it. But here, I blacked out large portions of the figure. But you know what? It looks better because of it. The blacks imply there is a lot of shadow on Batman, which makes sense since his suit is almost completely black. It taught me an important lesson: when things are almost all black, the whites of the figure really stand out more and can imply a lot of shape even if you don't literally see it. The gestalt principles apply here as well.

Weirdly, the thing that gave me the most trouble was making a perfect oval for the Bat-Symbol. I still have not figured a way to make good big ovals. Also note that the Bat-Symbol is not the same one that you would see on merchandise or even in the movie's own film poster. That was intentional since that is how it was in the movie. The movie's costume makers had to tweak the symbol due to some weird copyright issue. Fortunately, the symbol was fixed by the sequels to the more traditional Bat-Symbol.

"Is there a six foot bat on police payroll...and if so, what's he pulling down? After taxes?" Damn that movie is so quotable.