When I am supposed to be working: Rey and Finn 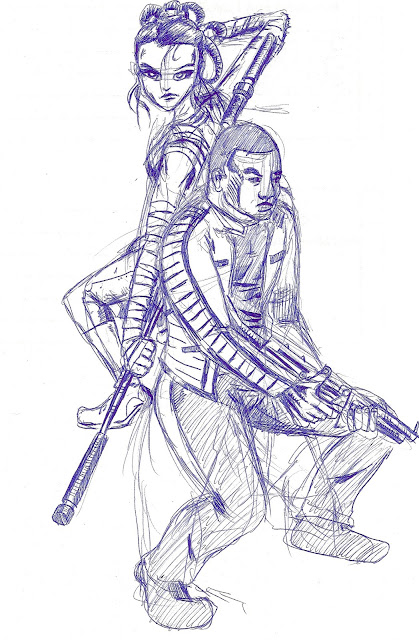 Here is another doodle when I was bored at work one day. I felt like a Star Wars kind of mood so I tried my hand in drawing Finn and Rey. I realize that Rey's hair is actually different than in the film, but what the hey, I did this from memory purely. Part of my motivation for wanting to draw Rey was because I really like posing characters with a  staff, because it is so cool looking. Also, I always try to practice on my female forms, which I would think was successful. She may not look like Daisy Ridley, but she looks good.

Interestingly, Finn was the one I had a harder time drawing. His pose is kinda lackluster and not nearly as dynamic as Rey's. Weirdly, I had trouble with making his legs look interesting, but it just kinda sits there. In fact, there is one anatomical issue with his left leg. It is a little too long in the kneecaps area. One reason I had trouble with Finn is because I actually think it is difficult to draw the pose of two hands on a rifle. But once again it is something that I am practicing in-just like practicing drawing females-so I can master it.