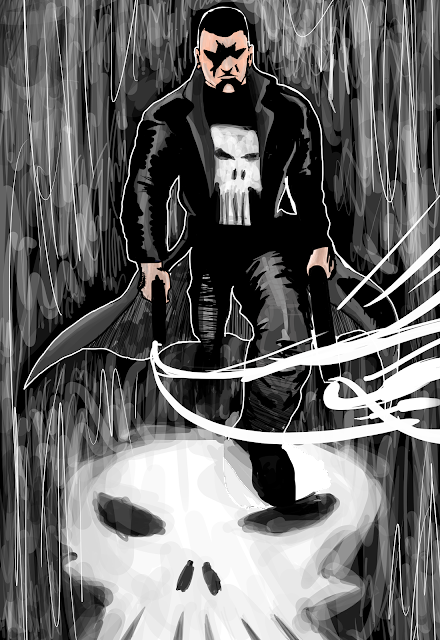 "One batch. Two batch. Penny for a dime...."
When I heard those words in the Daredevil season 2 trailer, it sent shivers down my spine. If you haven't caught Netflix's Daredevil, the show features the Punisher in a prominent role and it is great. New Punisher actor Jon Bernthal was great and creepy.

For the picture, I tried to go with a more watercolor effect for the background. The skull at the bottom is blurred by using a light grey color and then lowering the opacity level of it to give it an uneven look. The same technique was used for the skull on his suit too.

I normally hate doing likenesses because I am not very good at them, but I think I got Bernthal's likeness down. He has a skinny head, big nose, and a very short haircut in the show. All it takes is exaggerating a few facial traits to capture the look of the actor.