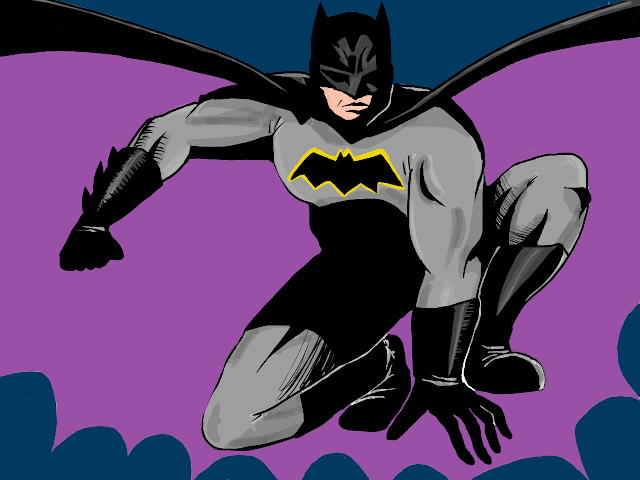 Another design I did using the Medibang Paint app. I really like Batman's new Rebirth costume. The yellow around the bat symbol makes it pop more, which I thought was a problem in some of the more recent Batman costumes, like the Dark Knight suit. The cowl's shoulder piece has three points to it too, which is like a subtle bat-motif. Finally, the purple on the insides of the cape gives Batman more color than he is typically used to and harkens back to his original costume when he first appeared in Detective Comics #27 with purple gloves. The purple is a color that Batman is not typically associated with, but the purples contrasts with his grey figure nicely.

Even though the costume is not normally this....bright, it was a conscious choice to lighten the purple of his cape because I wanted the image to have a more pop art-effect. Originally, I had the entire back image be purple, implying the cape is super big. But I liked to show the scallops of the cape to make sure people understand the shape of the cape.

The biggest challenge was to put Batman in as much shadow as possible without losing the details. For example, I initially drew the shadows covering a lot more of his face, but then I started to lose where are the eyes supposed to be and the placement of the nose. Another challenge is coloring the cape and cowl black without literally making it black. I used the darkest grey I can make that is dark enough to imply black, but light enough to discriminate it from the black of the shadows. It worked out fine. The other helpful technique is that I can add a lighter grey to highlight where the light hits Batman's cape and face.