Eagle Con 2016: Deadpool versus The Punisher 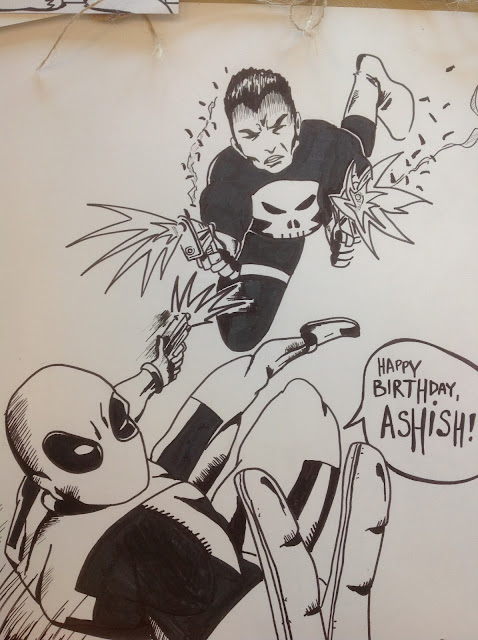 Another commission with Deadpool. But this time he is fighting the Punisher. In retrospect, I think the Punisher's arms look a little funky with the foreshortening effect. He is supposed to have his arms stretched out in front of his chest, but I don't think that the arms are long enough. Or maybe his hands and his guns are not big enough, so it makes his arms look too stubby. Another issue is that the arms are sort of blocking the Punisher's chest, which makes it look like that he is flexing his arms inwards too much.

Things that I do like about this picture? I liked the perspective on Deadpool. The view of his outstretched left hand follows along logically into an extreme close-up of his right hand. It looks natural. Another thing that I like is the Punisher's face. It is something that is easy to forget, but the Punisher is a very Italian looking guy. That is the way his face was drawn when he first debut, but artists often overlook that specific look. So I gave him a heavy brow-line, a receding crows-hairline, and smallish eyes to make it look like he is an Italian person.