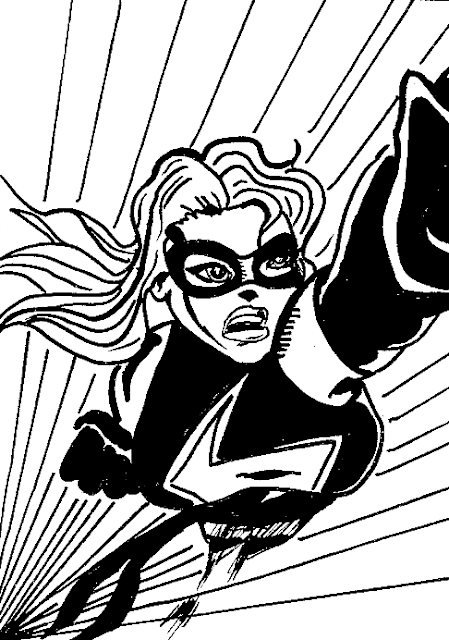 Despite the fact that Carol Danvers no longer goes by Ms. Marvel anymore, this is still a really cool image. I like how powerful and fast looking she appears to be.

A fun fact, the legs were messed up a little bit. I initially tried to make it straight and running parallel with the speed lines. However, because of her curves and hips, I decided not do that and drew her legs a little thicker than initially intended. Fortunately, a well placed pair of speed lines underneath her feet make it appear as if she is flying at a curve a little bit. It was initially a mistake, but a little tweak made it my favorite part of the picture.

The least favorite part of the picture is her head placement in relations to her shoulder and out stretched arm. I am not sure if I made the head too close to her shoulders because it cuts off a bit of her left cheek. It is not so bad where it takes you out of the picture, but it is noticeable. But the kicker is that I don't know if it is incorrect or not, no matter how much I stare at it.