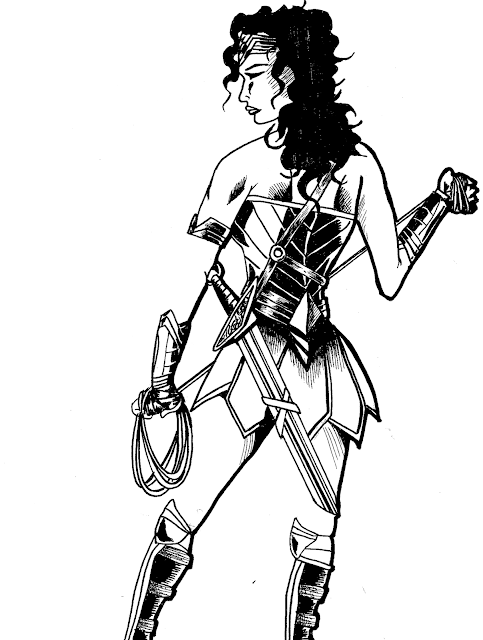 Hey whoo, it's Wonder Woman. If you are among the many people like me who saw Batman v Superman, you realize that Wonder Woman's inclusion is probably the only ray of joy that permeates through an otherwise dark and dreary film. I will give credit where credit is due, the way they set up Wonder Woman's character is interesting, mysterious, and-most importantly-leaving me with wanting to see her more. The other plus about Wonder Woman is their spot-on costume of her's. I am glad to see her red, gold, and blue look be translated fairly faithfully from the comics. The biggest difference is that she is wearing a Roman-style battle skirt rather than a bikini bottom, which if you have been reading the Justice League comic, you would know is becoming her standard comic book costume anyways.

One thing that I tried to do is give the figure of Wonder Woman a  Frank Miller vibe, hence the more angular edges and wavy hair. Incidentally, I prefer Wonder Woman with wavy or curly hair because it differentiates her more from all of the other super heroines who typically have long, straight hair. Another detail that I make a conscious choice of drawing for Wonder Woman is a long, sharp nose. Mostly because she is Greek, but also because it makes her look more warrior tough, as opposed to Wonder Woman having  a cute button nose.