Spider-Man vs. the Green Goblin 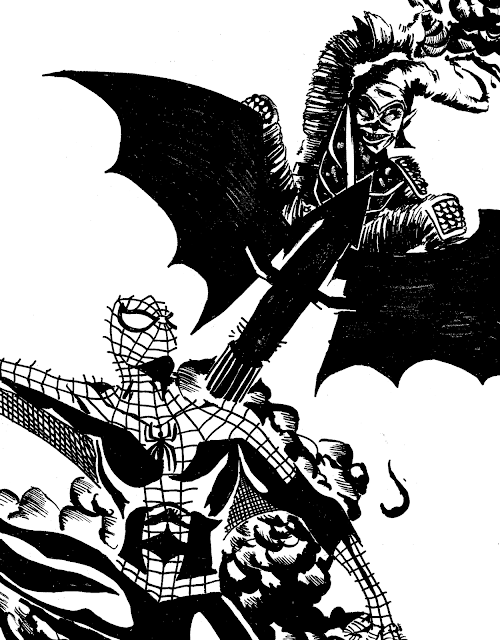 When trying to attempt a line-free drawing, it helps to either have a character that is predominantly black or with a lot of details on their body so they do not blend into the whites of the background. Which brings me to Spider-Man. The webs on his body make him the perfect guy to draw with no outlines. The blacks on his legs and torso really fill in his shape and the webs on his arms and head fill him out without having too much black in the picture. Which, if you don't know, can look cumbersome and confusing.

The Green Goblin also has a lot of lines and textured shadows that give him an easy figure to draw without outlines. The smoke from his glider also looks great as a background. Has anybody ever noticed that drawing giant plumes of smoke look a lot better black and white than in color? It is because smoke is normally grey already and artists tend to represent the grey with a lot of crosshatching (as seen in this picture). Unfortunately, that crosshatching detail gets lost in when colors are applied to it.