When I am supposed to be working: Conan 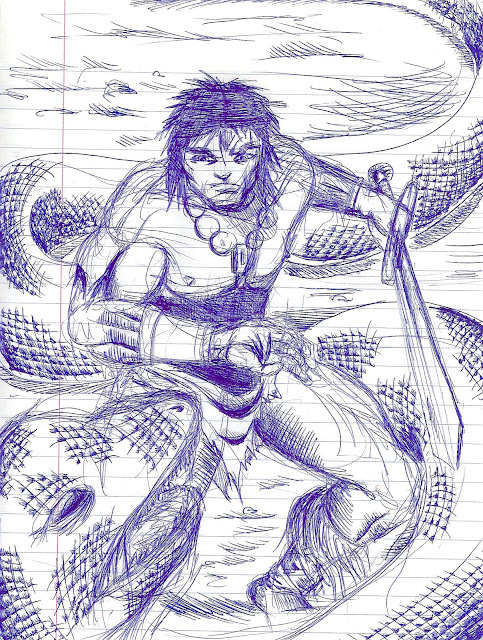 Here is a piece I did when I was super bored. Sometime last year, I saw Conan: The Barbarian starring Arnold Schwarzenegger for the first time ever. I mean I know of Conan and read his comics, but I have never seen the movie.

Conan's figure here is super easy for me: he has the bulky, muscular figure that is typical in a  comic book. The biggest challenge was whether his right hand makes sense or not. Like, is his wrist twisted in the correct way where it looks like that he is trying to wave the giant snake away.

Speaking of giant snakes, I take it back, that is the hardest part to draw. Since I did this in class, I had no reference what an actual snake head's shape should look like. It looks less like a snake and more of a brontosaurus head. I also was unsure how snake eyes should look. I ended giving him the blacked out eyes, but that made the snake look less intimidating. One thing I liked about the snake is the shadowing on the scales of it. It is strategically spaced out and individually inked. Not an easy feat, unless you are like me and have nothing else to do when sitting in class.