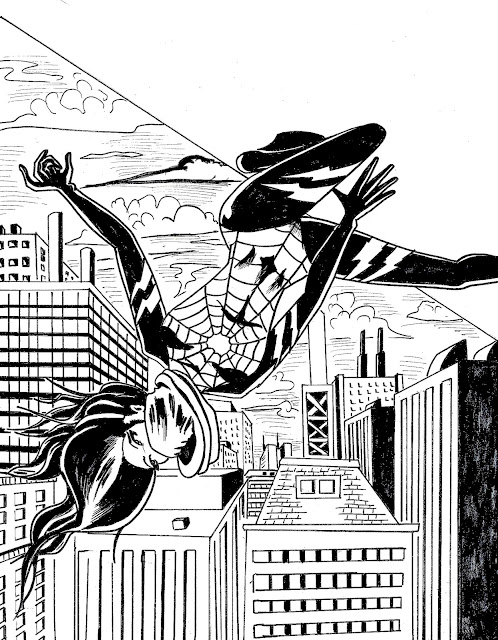 Silk is another picture I drew at Long Beach Comic Expo recently. Between the two most popular new characters to come out last year, Silk and Spider-Gwen and near the top. If you go to a convention, there are a surprising amount of cosplayers dressed as those two.

Silk's figure took a little bit of tinkering to get right. At first her ﻿right arm was way too long so I kept on having to shorten it until it looked appropriate. On the other hand (pun intended), I wasn't sure what pose her left arm should be. At first it was supposed to be clinging to the wall along side Silk's right arm, but then I decided to change it to make it a little visually different.

Another part of Silk's body that I took an inordinately long time with is drawing her butt. Or more accurately, her butt and hips. It is difficult to get the female hips correct sometimes, especially since if it is in a crouching pose.

The best thing about this picture is her hair. I really like how it falls down in layers, which gives it more volume.