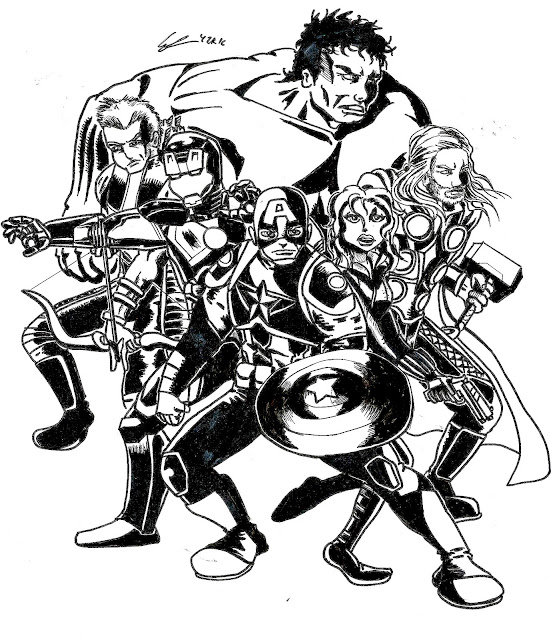 Another Avengers picture. I drew this for a T-shirt or bag design, which is why the background is blank. The difference between this picture and previous pictures of the Avengers is that I am drawing with more black inking. I am trying to play with the shadows more and black out larger pieces of their costumes to imply the dark colors in their clothes.

One person I would like to point out in particular is the Hulk. I am also experimenting more with doing shadowing and gestalt-like designs where I limit the amount of lines being used. The Hulk is a good example of limit the actual lines on his body and utilizing the shadows to form his muscles.

Upon retrospect, I wished that Iron Man's right arm was longer. However, since the picture was already so crowded, I had to shorten it so it would fit on the page. One thing that I do like about the picture, is Captain America's shield. It is so difficult getting a perfectly round shape for his shield at that angle. When I drew it initially, it was slightly uneven. Fortunately, because of the shadowing, it helped cover some errors that I made.