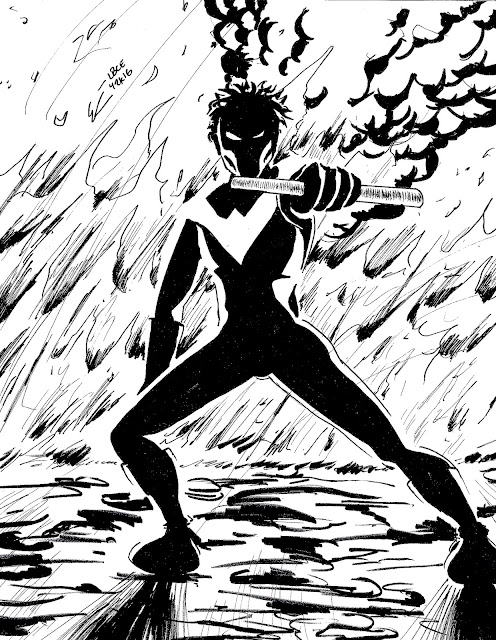 Here is a picture I drew of Nightwing (aka the first Robin) at Long Beach Comic Expo this past weekend. Part of the reason of why I was inspired to draw Nightwing is because I have been rematching Batman: The Animated Series over the course of a month and man, do I love the sound of the Nightwing theme music.

It is so heroic sounding with its bombastic drums and trumpets. More so, it is also recognizable and familiar. I would say it is as catchy as the theme from Indiana Jones.

Anyways, enough about music. I am really here to talk about my drawing. As you could see in the background, I am currently making sure I am using a lot of smoke effects to give the picture a heighten sense of drama to go along with the fire. Nightwing himself also has very few lines on his body. Most of his body is outlined by the raging fire streak in the background really. Also, the shadows almost totally dominates his body. We don't even see his face. I think it is a great looking picture; I am especially proud of how the Nightwing symbol looks on the blacks of his costume and against the fire.

Comic-savvy fans may notice there is a resemble to the iconic Daredevil image from the seminal storyline Born Again. While I definitely had the image in my head, you can tell the obvious differences in the picture. However, if I could go back and do it again, I would totally use this picture as reference to make it match the Daredevil picture more, so it could look more like a straight homage.