When I am supposed to be working: Bride of Frankenstein 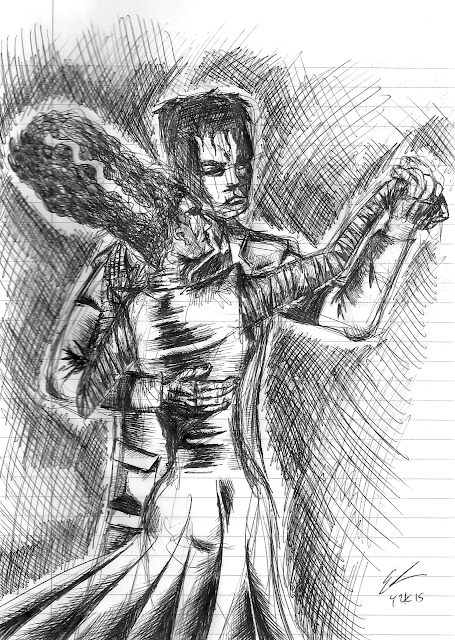 One thing that I have been noticing with my pictures lately is that it is the little details that really make the picture work. It used to be that I would neglect the smaller details: slightly crooked face, lack of shading in one area, or an irregular hand placement. But when I take the time to fix them or give more attention to it, then the picture really stands out.

For example, I drew this picture of Frankenstein and his bride dancing at work. It typically would be a nice picture; I have drawn them before. But what made it really stand from my previous attempt is the level of detail I put into the small things. Like, I really tried to make their hands touch and fold in a natural way, as if they were doing the waltz. Probably my favorite part of the picture is the Bride's left hand that is resting on Frankenstein's chest. I initially had no idea how to show her hand in the picture, but I shifted the placement of her left arm a little bit and now you are able to see it. What is more, is that it kinda informs you, the viewer, about how they are. It is not Frankenstein forcefully grabbing her. The gentle resting of the Bride's hand implies a certain level of gentleness and a shared tender moment between the two monsters. Like I said: it is the little details that make the picture work.