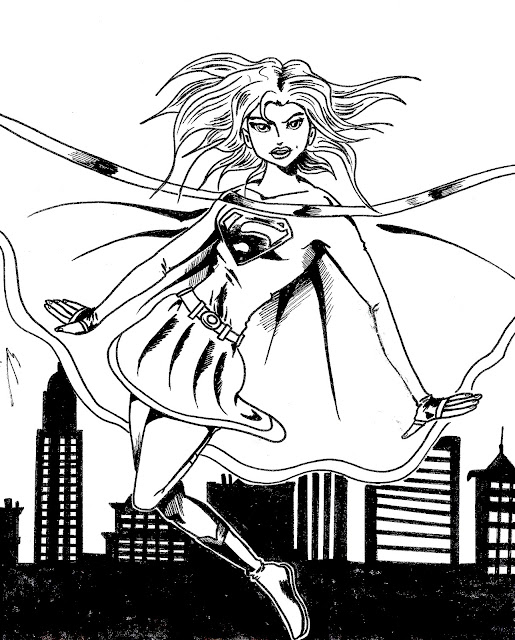 So the Supergirl TV show has been on for a couple of weeks now and it has been....uh, okay, I guess?  It's not bad, but it is super cheesy and just follows that same rom com formula. For example, they have all the same cliches and tropes of a rom com, like how Supergirl has a male friend who is secretly in love with her but cannot tell her his true feelings. Or how there is a love triangle between her, that friend, and a surprisingly hot-looking Jimmy Olsen. Ever since the trailer for the first episode came out, it made me think of that one SNL parody sketch of the Black Widow movie. It is so cheesy in that sense. I am not a feminist, but I can't imagine that the show helps break any female stereotypes or misconceptions.

Anyways, I spent way longer talking about that show than I anticipated. I wanted to showcase my art here. This piece really demonstrates the need for either a variety of pens or well placed White-Out. What happened was that the art pen that I used (Papermate Flair Medium size tip marker) was a little too fat for the more delicate details, specifically her eyes. The pen ended up inking her eyes a little too heavily, making it look like that Supergirl overuses eye shadow. It didn't look terrible, but the issue is that Supergirl should not be wearing slutty looking make up. That is really not her character. So using a White-Out pen, I carefully took away the dark lines under her eyes. Now Supergirl looks sexy, but not trashy.

Another anecdote about White-Out is that I made her left arm a little too fat. So I thinned it out by Whiting Out the arm and redrawing it to make it look skinnier and more feminine. Usually, I would catch these mistakes in the pencil stage of the picture, but sometimes, there is some things that I overlook, so having White-Out at your disposal can really come in handy.