When I am supposed to be working...Loki 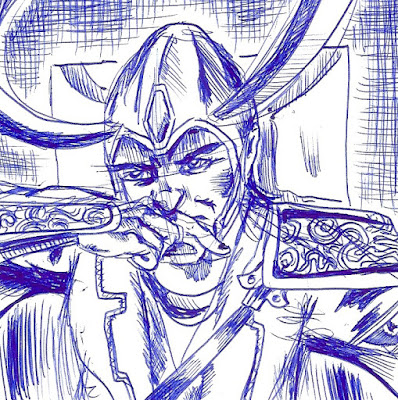 Here is a quickie sketch I did of Loki.  I recently rewatched the original Thor movie and I really liked this one particular camera shot of Loki where he is deciding to kill Thor or not and he is sitting on the throne with his hand under his nose thinking.  It felt like a humanizing and pivotal moment where you are not totally sure if Loki is going to be redeemed or turn into an all-out villain.

For whatever the case is, that image really stuck with me. So I tried to recreate it. What is interesting is that his body language and posture needs to be very relaxed feeling, so I took some time making the shoulders and head placed in a certain way. Like, you think that it is such an easy, small detail to do, but it actually took a lot of time and energy to make the head tilted exactly right. An art choice that I wish I could change in retrospect is that Loki only has one finger under his nose, which looks too much like a he is wiping his nose.  If I could correct that, I would have two fingers under his nose, so it displays more of him in thought.