When I am supposed to be working: Superman 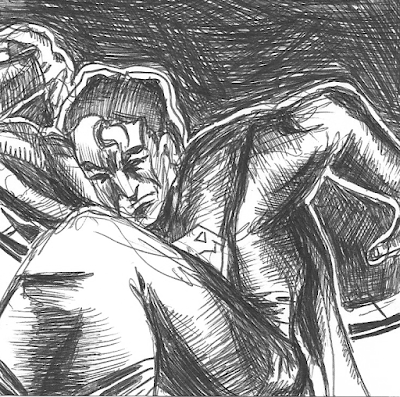 Here is an example of when I am not able to fit everything in a picture. Here is a picture of Superman, but can you tell what he is doing? My fiancé thought he was getting revved up for a high kick. However, what he is really doing is holding the Daily Planet globe while getting a worm's eye view of it. However, the issue is that I wanted to make the Daily Planet globe big, but it is so big that it falls out of the frame of the picture, so it is hard to give the impression that it is supposed to be an object. The other problem is that other than Superman, there is no sense of how big the Daily Planet globe because there is nothing else around it to give it scale. This is what I get for drawing this on a small 6x6 piece of paper.

One thing that this picture has going for it is that Superman looks great. I wanted to do a crazy low angle of him kneeling, which is surprisingly effective. I am glad that his huge left leg is drawn clearly enough to be recognizable. The other thing that I like about Superman in this picture is his face. It looks good because I casted the right amount of shadow on his face, where I obscure some of the details, like his eyes, but you can still see that it is a human face. Also, you can really see the sense of straining Superman is doing, implying that he is doing something strenuous.