When I am supposed to be working: Storm 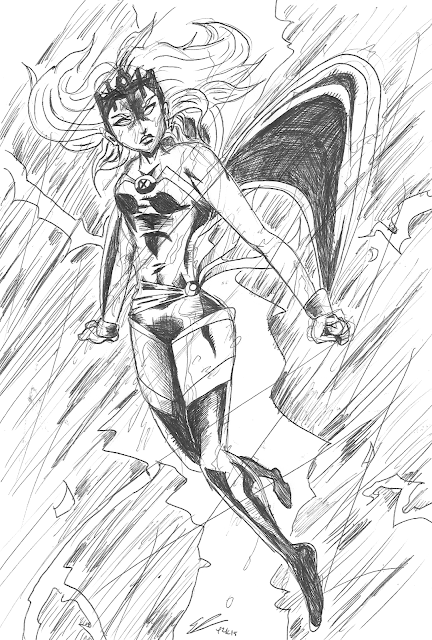 I have been reading a lot of X-Men lately, so I have that on my brain. I also always enjoyed the way Storm looked in any of her costume iterations. So, with that being said, it has come to my attention that I always heavily critique my drawings, almost to the point where it sounds like I hate my stuff. But, despite how my blog posts sound, that is not true. As proof, I really like this drawing. Like, really really like it. There is only one flaw that I can see of it. According to my fiancé, Storm's left arm is too beefy looking. Like, it looks too muscular. I beg to differ, but I must admit that it is a strangely drawn arm. It almost looks like it is bent the wrong way. That was a mistake that I wasn't able to fix.

But as for the positives of the picture, I love the way the body looks. For example, my fiancé also says that Storm has an appropriately big booty. And her legs are nice and long and sexy looking. The same for the shading on her face. Typically, I overdo it on the shading and then I accidentally make the character look like they have blackface or something. But here, the shadowing looks perfect like the light is coming in around her face.

Another thing that looks really good is the clothing texture of her costume. It looks like it really is some material that is stretched across her body. Finally, the one thing that I really enjoy about this picture is the rain and lightning behind Storm. The rain looks wild and crazy. Additionally, I drew rain splatters and water running down her body to give it that extra detail to make it look like Storm is truly in the middle of the rain.