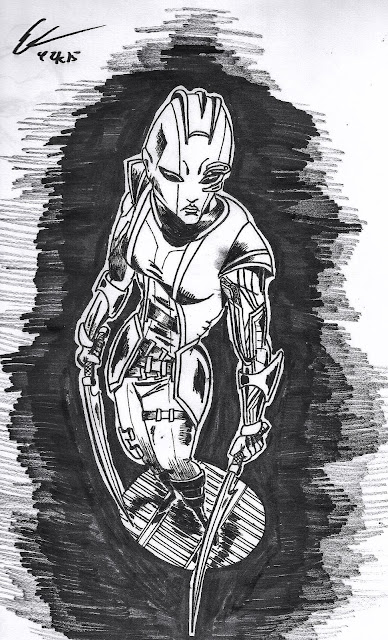 It has been a little over a year since Guardians of the Galaxy came to theaters and our hearts.  To think, prior to the movie's trailers, most of us haven't even heard the song Hooked on a Feeling. What could we do without it now?

I really like Nebula's look in the movie.  She his simple, but interesting looking and she is also the only prominent female villains in the Marvel Cinematic Universe, so that has to count towards something.  I recently read the first issue of Guardians Team-Up where-as the title implies- the Guardians of the Galaxy teams up with different superheroes each issue.  The villain for the first issue was Nebula, who was skillfully drawn by Art Adams. I really liked the way Adams depicted her and streamlined her movie costume a little bit to look more comic booky.
I'd figure that I would go ahead and take a stab and my depiction of Nebula.  I really enjoy doing these downward, bird's eye-view shots of the character, making me foreshorten the torso and legs. It is easier for me to do now and the effect it gives looks really cool.  I have  been using less smaller pens and utilizing more of a fatter marker in my drawings because I like the bold, heavy lines it gives me. It is also more consistent that the smaller art pens, which tends to abruptly stop working midway thru drawing a line.  The marker also gives me more control over how smooth and thick I want my lines to be.  Of all things to be proud of in this picture, I like how the shadows sync up so well with Nebula's body and swords. It is a small detail, but it really makes the picture give an added depth of realism.