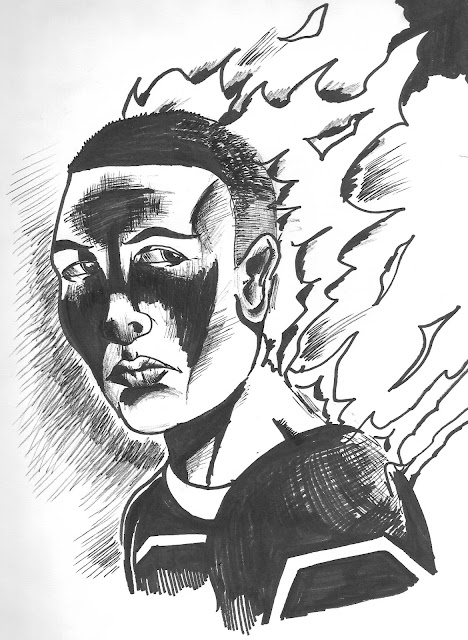 One thing that I have mentioned before on this blog is how terrible I am at doing likenesses.  And yet, when I do art events, doing caricatures is something that I always get asked to do.  I  cannot tell you why I am so bad at doing them, though I suspect that is has to do with being too focused on one detail (such as eyes) and then neglecting how the rest of the face should look.

Well here is my attempt at Michael B. Jordan as the Human Torch in the just-released, highly-derided Fantastic Four movie. Or if you want to get specific, according to the studios, the new Fant4stic Four movie.

Let me tell you my personal feelings on the Michael B. Jordan casting of a typically white character. I don't have any qualms about diversity in movies, particularly comic book movies.  My biggest concern is diversity for the sake of diversity.  In the case with Fantastic Four, it is diversity that actually interferes with the storyline and background of other characters.  In the comics, Johnny and Sue Storm are brother and sister.  However, in the movie, Sue Storm is adopted and non-American.  This is the type of storytelling gymnastics that serves to complicate a character's background. How do they relate to each other if they obviously know that one is adopted? How does the world treat them differently, as opposed to a same-race sibling relationship? These are questions that sorta need to be addressed, but aren't.

Okay....deep breaths..... So getting back to my picture, I didn't quite capture Jordan's likeness well. In this case, I think it was due to his nose being too far from his eyes, which makes his face look longer than it really should be. Once again, I hope to eventually perfect my technique for drawing good likenesses.  Here is a picture of the real Michael B.  Jordan for comparison and you can be the judge.