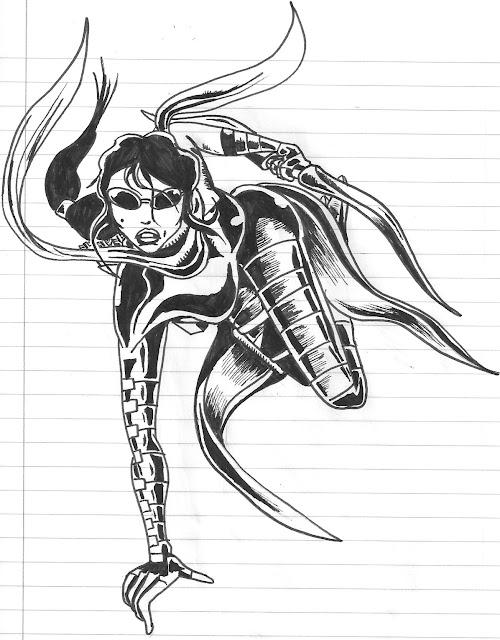 Hey-yo!! For those in the know for comics, there are actually two people with the name Hawkeye running around currently.  And one of them is a girl!!  The original Hawkeye (Clint Barton) took the younger Hawkeye (Kate Bishop) under his wing and is doing a partner/mentor role with her.  While they fight crime together, I feel like that it must be confusing to say, "Watch out world here comes the crime fighting duo of Hawkeye and Hawkeye!!" This is something that Batman would never allow to happen. Anyways, I digress...

The picture of Kate Bishop Hawkeye  is based on her costume that she wore in the original Young Avengers comic (it is also my personal favorite one).  I had this crazy image in my head were she would be evading something and does a leap.  I actually drew the pose out in stick figure form first and then drew out the whole image.  Also note that it is totally drawn on binder paper.  The reason for that is because I drew the sketch in pencil at work, but loved the image so much I went home and finished it off using my nicer markers (Papermate Flair medium tip, to be exact) and ended up giving it a much more polished look.  I particularly like the foreshortening of her torso so really, I just drew her boobs and then her butt.  It is a surprisingly tricky thing to do because if you draw the butt in the wrong area or draw it too big, then it just looks like she is a squatty, fat person.