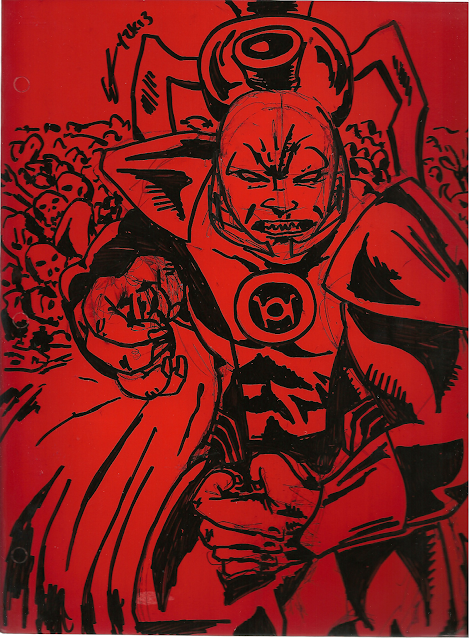 This is the Red Lantern a.k.a. Atrocitus. He is a relatively new character in the Green Lantern  comics.  Red Lanterns are powered by rage.  So the more rage and vengeful one is, the more powerful they are.  In the comics, Red Lanterns are known as being these wild dogs who cannot even speak, with the exception of Atrocitus.  The Red Lanterns have been so popular that they even have their own comic.

For my picture, it is drawn on a folder using a G2 gel pen and a thick tipped Sharpie.  Atrocitus is actually one of the easier Lantern people to draw, since he is just a big, scary looking alien.  Unfortunately, I drew him slightly off-model so he kind of resembles the Superman bad guy Darkseid (pronounced Dark Side).

Oh well.  I have to be mindful not to draw Atrocitus like that again in the future.