Shazam and His Hair Style 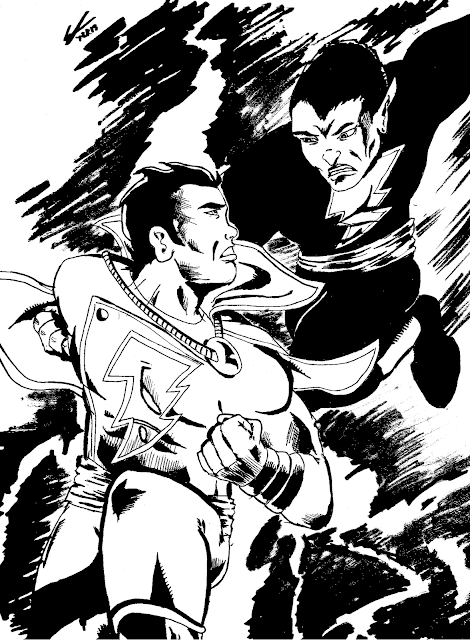 Oh Shazam, or as some purist call him still, the original Captain Marvel.  When ten year old kid Billy Baston says the magic words "Shazam!" he turns into an adult with the strength of Superman.  His arch nemesis is Black Adam, who has the exact same powers as him.

Most people who aren't comic fans simply refer to him as Shazam.  But little known fact, the comics didn't call him that officially until last year.  Until that time, he was always called Captain Marvel.

As far as the picture goes, I really liked the way I drew the lightning in the background.  That came out really well with just using a Sharpie.

Another thing that I tried to do was have Shazam's hair look more scragglier than Superman's hair, which is normally more clean cut.  Oddly enough, when I looked at some comics for reference, they all had his hair slicked back, which I thought that was weird since he is a kid, so he should have a more casual look, which is in in contrast to Black Adam's slick back, super serious, adult haircut.