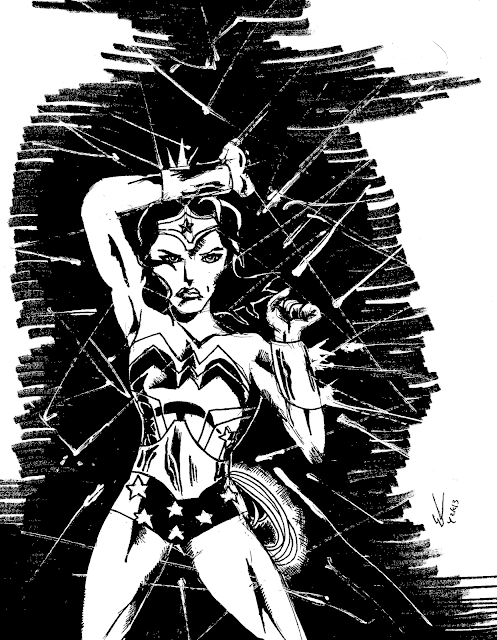 So if you haven't heard, Hollywood casted an actress to play Wonder Woman in the upcoming Man of Steel  sequel.  Gal Gadot of the Fast and Furious  movies is set to play her.  I am of two minds of this.  First, it's great that they are trying to make a live action Wonder Woman, even if it is really Superman's movie.  On the other hand, it is still a Superman movie, and there are a billion things that are already jammed pack in there including, but not limited to: Batman, the Daily Planet, the Clark Kent identity, Lex Luthor, and whatever other villains there are in the movie.  It is a lot of stuff for one movie.

Switching gears slightly, I drew this in actually only a blue ballpoint pen.  But I ended up liking the drawing so much that I then traced it over with a Papermate Flair medium size pen and then blacked out large portions of the paper with a fat tip Sharpie.  To give it a more interesting pop, I used a White Out pen to draw the bullet lines.  Finally, I scanned it and used Microsoft Paint to erase most of the sketch lines on her body and face.